Food Labels: What They Really Mean to You. 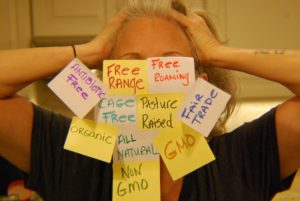 Food labels can be confusing.  Words like “free range” “grass fed”, and “organic” seem to be the hottest buzzwords in marketing these days but what do they mean? Let’s solve that mystery here. This way, you’ll know what the labels mean,  where your food comes from and how it’s been produced.

“Cage free” means that the birds were raised without cages. That sounds logical, right? But, what it doesn’t explain is the conditions in which the birds were raised. Where they raised outdoors in a pasture (their natural habitat) or indoors in overcrowded and feces filled hen fattening areas (which is more common than you’d like to know). If you’re looking to buy eggs, or poultry you want “pasture raised” eggs. Don’t fall for cage free which is meant to make you feel good but doesn’t tell the whole truth.

The words “free range” or “free roaming” as defined by the USDA for egg and poultry production means that birds are allowed access to the outdoors so they can engage in their natural behaviors. It does not say anything about their being antibiotic free or cruelty free. Nor does it specify how much time they spend outdoors. It could be very little within their lifetime. Another sad FYI, these claims are defined by the USDA but they are not verified by a third-party inspector. … you know the ancient Chinese proverb…” what is not inspected cannot be & must not be expected”. OK maybe it’s not a Chinese proverb but it is a proverb!

“Pasture raised” means that the animal was raised on a pasture where it could eat natural grasses rather than being fattened on grain in the feedlot or farming barn. Pasteurizing livestock and birds is traditional farming. It’s a technique that allows animals to be raised in a humane environment. These animals can move freely and are not confined in cages or stalls with little room to move. They are happier and for some people that translates to health-full food. Many believe that hanging around negative energy brings us down, and eating an animal that has been miserable its whole life is not nourishing to us & even brings us down – causing some people to have anxiety and depression.

Some people have claimed their anxiety and depression went away when they stopped eating mass produced, conventionally farmed animals. Whether that’s too much phooey for you or just caused an epiphany, energy aside, animals that are pasture raised are healthier choices for us then those who never get to see sunlight.

Antibiotic free only means of the animal was not given antibiotics during its lifetime. Again, this doesn’t say anything about the way in which the animal was raised.

You see “fair trade” labels a lot on coffee. It means that farmers and workers (often in developing countries) have received a fair wage and worked in acceptable conditions while growing and packaging the product.

Not to get smart here… but what exactly does that mean to us as the buyer? Sure, I admit, it makes me feel good but what does it say about the nutrient level of this food? I’m not sure that it does…. Ok so maybe if the workers were fairly treated they didn’t get mad at their boss and blow snot in my coffee beans? …Ok I’m being gross here. I’m just seeing if you are still with me. Feel free to let me know in the comments section of this post lol.

GMO’s could be a blog post in and of itself. Genetically modified organisms are the result of a laboratory process in which the genes from one species are forced into the DNA of another in attempt to get a desires trait or characteristic. To do this, scientists use bacteria or viruses (in the case of plants) or other animals (in the case of livestock).

GMO’s were first introduced to the food supply in the 1990’s.GMO’s are BANNED AS A FOOD INGREDIENT IN EUROPE and elsewhere. Still want to eat these? What’s worst? The FDA does not require these foods be labeled as GMO. So look for NON GMO labels or buy organic.

Currently GM crops in the US include soy, cotton, canola, con, Hawaiian papaya, sugar beets, zucchini & yellow squash unless specifically labeled NONGMO. Products can be label GMO free if they are produced without being genetically engineered.

You can get more info about GMO’s at:

Natural or “all natural”

There should be more of a warning sign here. There are currently no standards for this label except when it’s used on meat or poultry. The USDA requires that when you use the label natural it means that the meat or poultry underwent minimal processing and doesn’t contain artificial flavors colors, preservatives or fake ingredients. Remember this does not mean that the food was raised humanely, free of hormones and or antibiotic’s.

The label or seal of organic means that the product or animal met the strict guidelines required by the USDA. It means that no less than 95% of its ingredients are organic.

In farming practices, it means that prohibited materials such as fertilizers, pesticides and sewage sludge we’re not used within the last three years in the production of this fruit or vegetable. There can be no use of GMO’s. And, farmers must employ positive soil building and manure management as well as engage in crop rotation practices which yields more nutrient dense foods.

For animals that means that they were provided outdoor access and refrained from antibiotic and hormone use and given 100% organic feed.

New food labels and claims pop up regularly. If you have a question about something you read or saw you can ask your Mama Frat Here